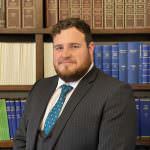 Ben grew up around Leeds and York, attending Huddersfield University to study a 4 year combined Legal Bachelors and LP degree before obtaining his BPTC at BPP Leeds. Post BPTC Ben obtained his Legal Masters Degree from BPP Leeds also.
Prior to joining 39 Park Square Ben worked as a criminal defence paralegal conducting litigation on a crown court caseload.
Ben began his career as a full tenant at number 39 on 16th June 2021.

Ben is a Semi-professional rugby player currently playing for Hull Ionians in the 4th level of English rugby. He has also been selected to represent Yorkshire in the last three County Championships.
Having lived in the countryside for most of his life Ben has developed a love of camping and hiking with his dogs.
Having inherited his love of cars from his Dad he has recently restored a 1980 Series iii Landrover.
Ben is also a keen clay pigeon shooter.