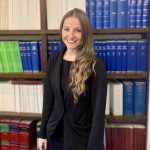 Originally from Surrey, Lauren moved to Yorkshire in 2015 to undertake an internship as part of her degree at a criminal defence firm. In 2017, after graduating with a First Class Honours degree in Law, Lauren decided to make the move to Yorkshire permanent and undertook the BPTC full-time at BPP Leeds. Lauren received a full ‘Exhibition Scholarship’ from The Honourable Society of the Inner Temple of £19,600 towards the BPTC as well as the ‘Regional Programme Leader’s Scholarship’ from BPP.

Following successful completion of the BPTC, Lauren was awarded a prize for achieving the highest mark of the year in the Advanced Criminal Litigation and Family Law modules on the course. Upon securing Pupillage at Chambers, Lauren was also subsequently awarded the ‘Rachel Lawrence Scholarship’ from the Inn.

Lauren undertook a criminal law pupillage at 39 Park Square under the supervision of Nick Adlington. After successful completion of her pupillage, Lauren joins Chambers with previous experience having worked as a criminal defence paralegal, conducting litigation on a Crown Court caseload. Lauren also previously worked as a County Court Advocate, where she acted on behalf of both claimants and defendants in a variety of civil hearings including infant approvals, bankruptcy proceedings and landlord and tenant disputes.

Lauren loves to travel and explore different places. In the summer of 2018, she packed her rucksack and went interrailing across nine European countries including the Czech Republic, Belgium, Hungary, Germany, Poland, Italy, Switzerland, France and Austria.